‘Rosie the riveter’ and the history of women in welding 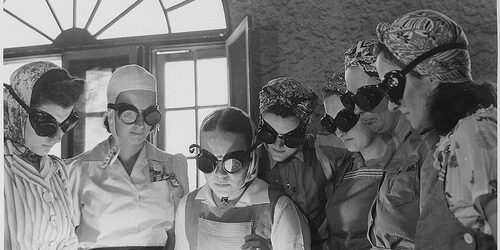 The history of women in welding started as a female labour revolution which took place during World War II. American women were needed to work for their country in a variety of positions.  So, for the first time, because of male enlistment, they moved from domestic works to enter the workforce in unprecedent numbers, taking jobs previously closed to them and reserved for men up until then.

As a consequence, the female percentage of the US workforce increased from 27 to almost 37 percent, between 1940 and 1945. The aviation industry saw the greatest increase in female workers. More than 310,000 women worked in the U.S. aircraft industry in 1943, making up 65 percent of the industry’s total workforce (compared to just 1 percent in the pre-war years).

The munitions industry also heavily recruited women workers, as illustrated by the star of a government propaganda campaign “Rosie the Riveter”. Based in small part on a real-life munitions worker, but primarily a fictitious character created by J. Howard Miller, Rosie became one of the most successful recruitment tools in American history, and the most iconic image of working women during the war.

The most commonly known version of Rosie the Riveter, her prototype, was created in 1942 and featured on a poster for the Westinghouse power company under the claim “We Can Do It!” In 1943, Redd Evans and John Jacob Loeb released the popular song “Rosie the Riveter”.

Rosie is still used as a symbol of feminism and women’s economic power.

End of World War II, what was going to happen?

They were supposed to return home after the war ended, but they refused. So, this led into a series of labour reforms for women, resulting in a more gender integrated workforce today.

Nowadays, there are technical training solutions that favour the integration of woman into industrial careers, like welding.