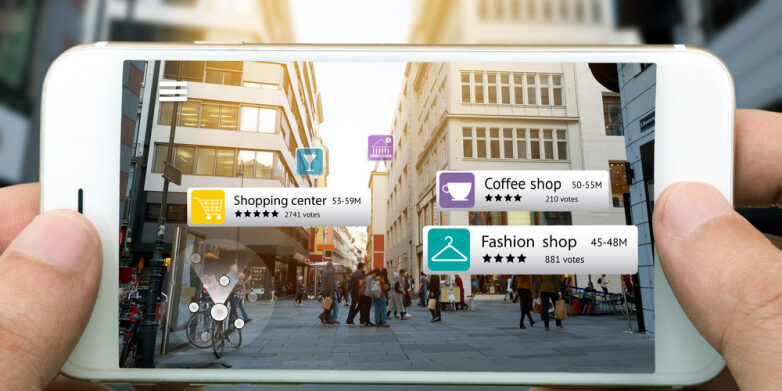 Despite being a hot topic and the most popular trending tech, some people and some markets still don’t embrace Augmented Reality.

These are our four reasons to convince the most sceptical ones of the growing capabilities of AR and that this technology already is and will more and more be part of our daily life.

1. It’ is not exactly new technology
The origins of Virtual and Augmented Reality can be set in 1957, when the cinematographer Morton Leonard Heilig developed Sensorama. This machine was a movie theatre that enabled the user to get immersed into a 3D film with stereo sound, by basically blowing wind on him/her and vibrating the seat. That’s why Heilig is considered the ‘father of Virtual Reality’.

Lately, in 1968 Ivan Sutherland with the help of his student Bob Sproull developed the first VR Head-Mounted Display (HMD) system, named as ‘The Sword of Damocles’, using computer-generated graphics to show users simple wireframe drawings. It had very limited capabilities, but it was the first step to develop Augmented Reality technology as we know it today.

Some events in the 90’s marked the starting point of modern AR. In 1990 researcher Tom Caudell coined the term Augmented Reality and eight years later the first iteration of AR was shown on TV, as the ‘1st & 10’ line during an NFL game.

In 1999 Hirokazu Kato released ARToolKit, an open source library that enables to develop AR applications. With this ARToolkit any Smartphone having camera and internet connection could capture video in the real world and superimpose 3D images on it. Besides, since it can augment the effectiveness of navigation devices, in the same year, NASA’s x-38 was flown utilising a special AR dashboard for navigation.

A decade after, in 2008, mobile app developers started to work in AR based applications for smartphones. At this point, AR was recognized globally.
However, in 1901 Frank Baum, envisioned and first mentioned the idea of an electronic display/spectacles that overlays data onto real life (in this case ‘people’), it is named a ‘character marker’.

2. It’s a step forward Virtual Reality (VR)
Augmented reality (AR) is a live direct or indirect view of a physical, real-world environment whose elements are augmented by computer-generated sensory input such as sound, video, graphics or GPS data.

Basically, Augmented Reality consists of superimposing virtual information (text or images) over a person, object or space in the real world using a camera device or a vision module (usually glasses) and a combination of computerized processes, augmenting and enhancing the visual experience. The example that best fits this definition of Augmented Reality is a hologram.

On the other hand, Virtual reality is an artificial environment that is created with software and presented to the user in such a way that the user belief and accepts it as a real environment. Virtual realities artificially create sensory experience, such as sight, touch, hearing, and smell.

3. It enhances the learning experience
Beyond entertainment and commerce, like the most recent and famous example Pokemon Go, Augmented Reality is expected to play an important role to change traditional education, transforming the way people learn.

Benefits of using it in training are uncountable in terms of time, costs and environmental advantages. In fact, according to Stanford University Virtual Human Interaction Lab researcher Jeremy Bailenson, human brain absorbs things 33% more effectively when exposed to the immersive atmosphere of AR and VR. This implies that students and employees will be able to learn faster and comprehend things more quickly in the future.

It is also useful in the training of manual skills of industrial trades, like welding, helping to reduce costs, accidents and pollution of traditional methods.

4. It’s worth its value according to present and future growth
In 2014, Augmented Reality applications generated $5 billion and by 2020, AR is predicted to have more than one billion users worldwide.

Furthermore, Heather Bellini of Goldman Sachs Research predicts that AR will become an $80 billion market by 2025—the size of the desktop PC market today.